skip to main | skip to sidebar

Sunday Favorites – Celebrating 1 year and one of my favorite posts….

I posted this “story” last year and I had a lot of fun !

Small Home in the Country locked down after local PRISON BREAK !!!

A  prison escape happened just before sunset Tuesday September 29,2009.  It happened at the Owl Canyon Penit-HEN-tuary. The escaped convicts should not be approached as they could be armed and dangerous. Some may call them “ JAIL BIRDS “ but, we don’t want to give them a label….you decide. This is the picture that was captured at the local watering hole….. 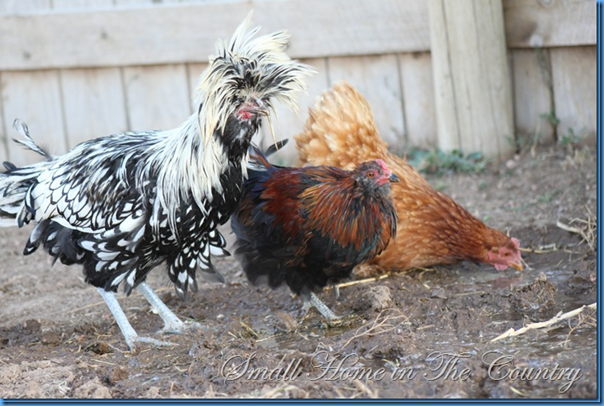 The JAIL BIRDS are known as :

Mack – AKA The Godfather

How did they escape out of the high security prison you may be asking yourself.  This next image was captured on film – judge for yourself *** Warning the next image may be graphic *** 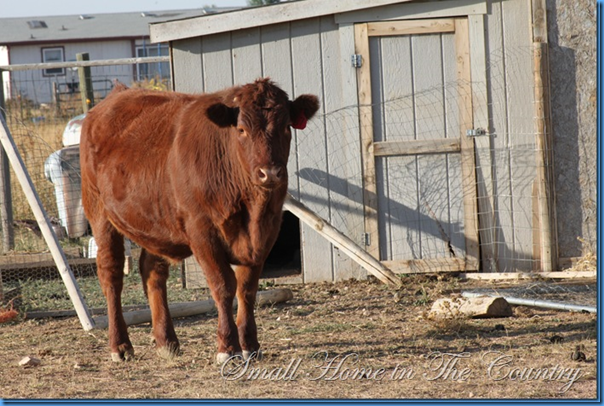 This prisoner happens to be “ON DEATH ROW” , yes, he is counting his days and seems to be making the best of them.  He wears a bright red coat and lately his name has been Satin.  If you follow this blog you may have seen this same criminal breaking out of jail in the spring and making a ruckus.  Officials aren’t sure yet how Satin broke down the high security fences (and gate) to break out the JAIL BIRDS –it is under investigation. 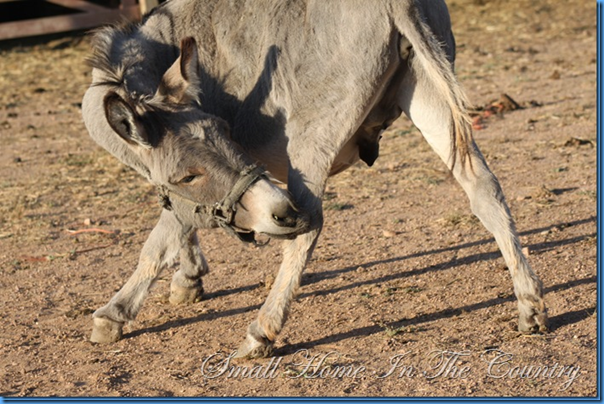 Wait, we seem to catch Officer Grady Tucker off guard…. 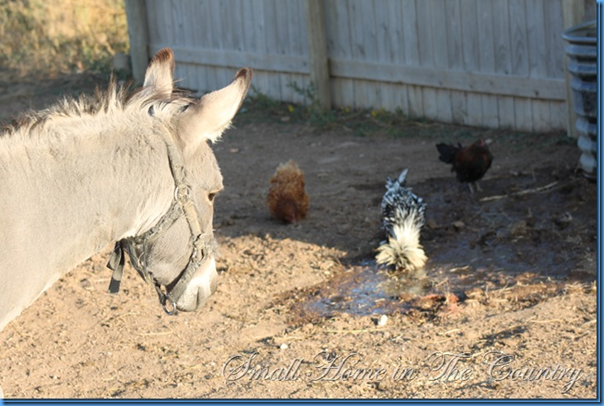 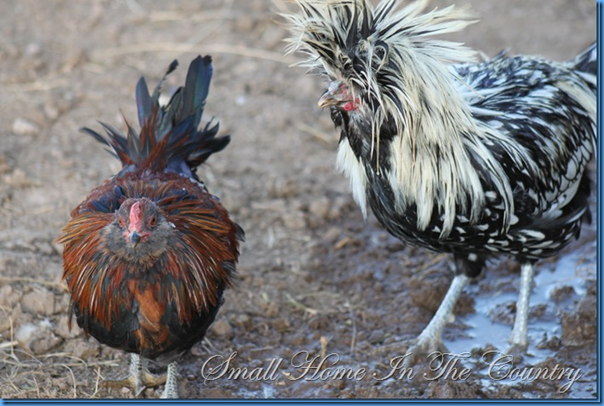 Get a load of the unruly hair style on Left Fingered Oscar. Remember what prison does to these people. 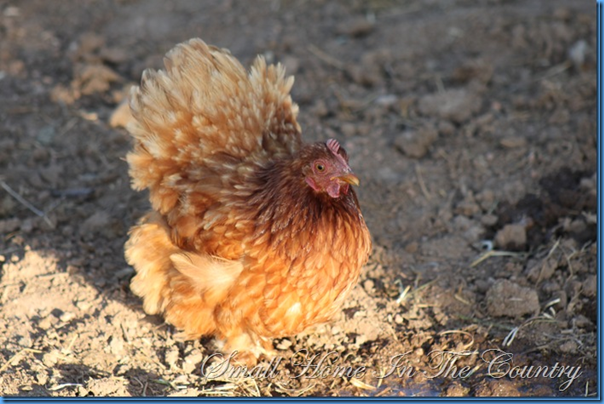 Meanwhile back at the Penit-HEN-tuary – his days are numbered and he isn’t budging…. Here stands Satin – as if nothing happened…… We are checking the freezer space at this moment…..

DISCLOSURE – THIS IS NOT A POST FOR THE FAINT OF HEART OR FOR VEGGANS. 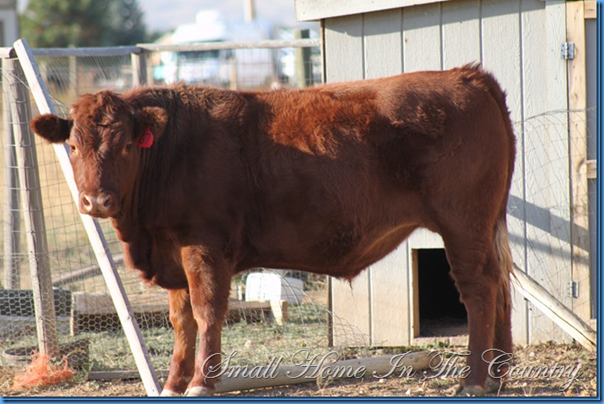 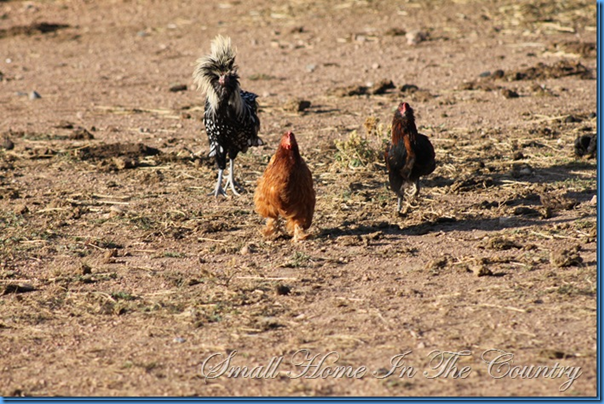 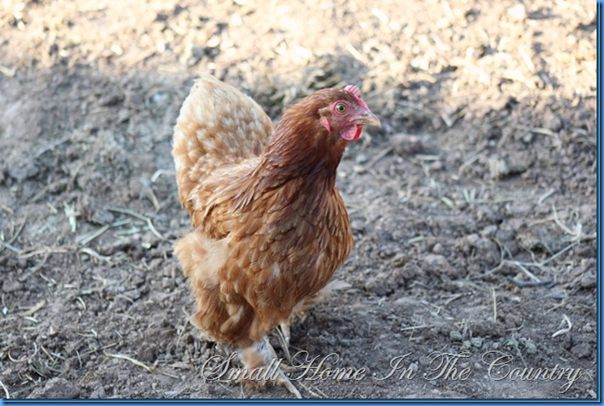 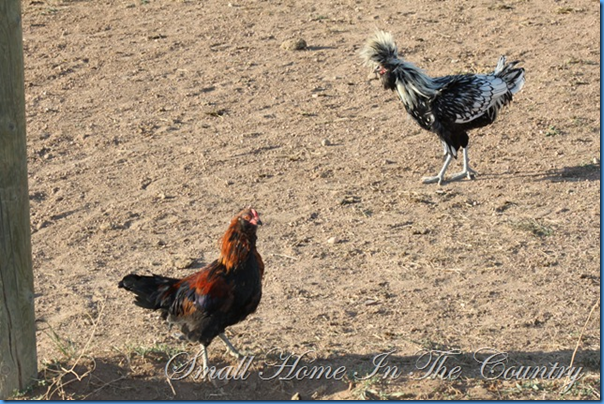 The following prisoners DID NOT ESCAPE…. 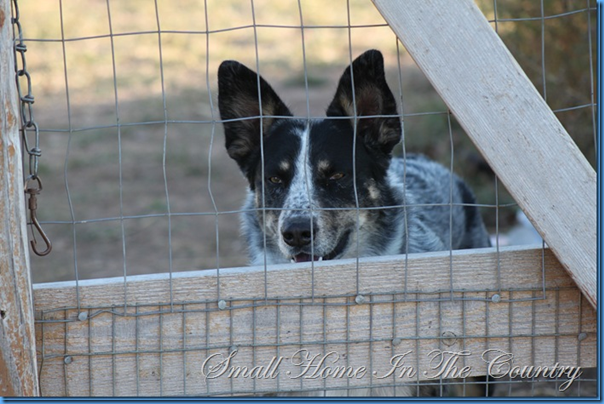 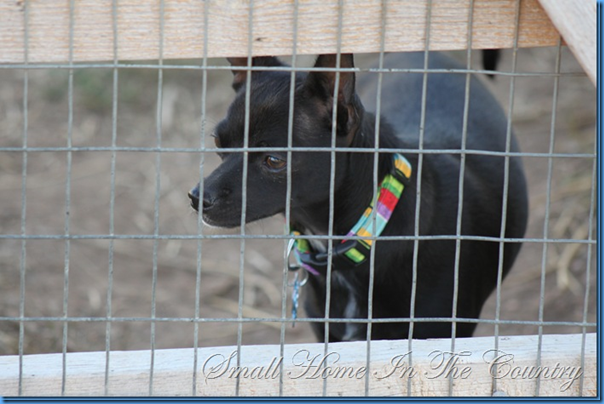 this is not a paid announcement and no money exchanged hands) End of commercial. 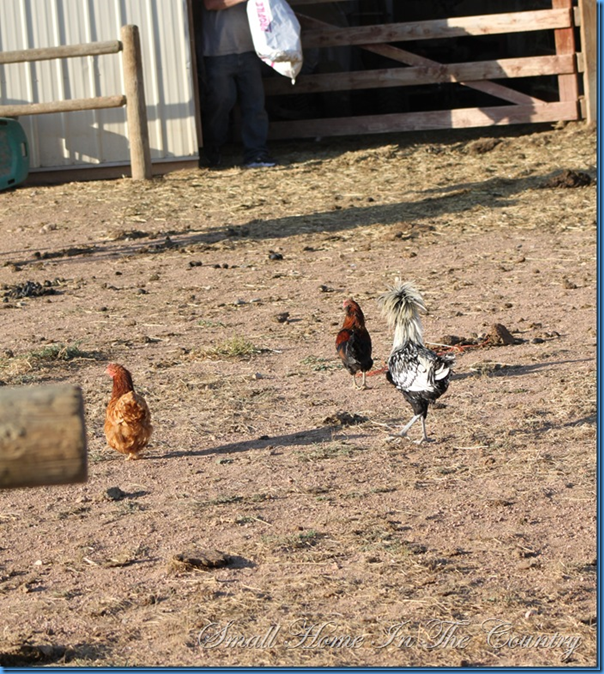 Until the prison is built again – the JAIL BIRDS will have to live in the large compound aka the barn. 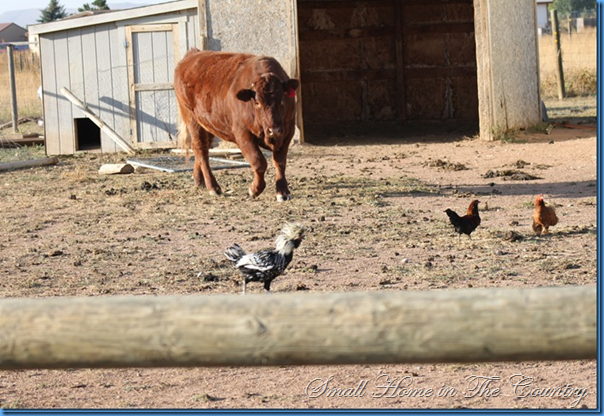 We leave you with these images… 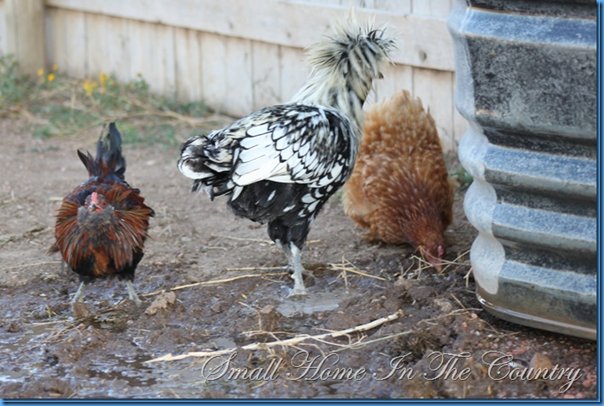 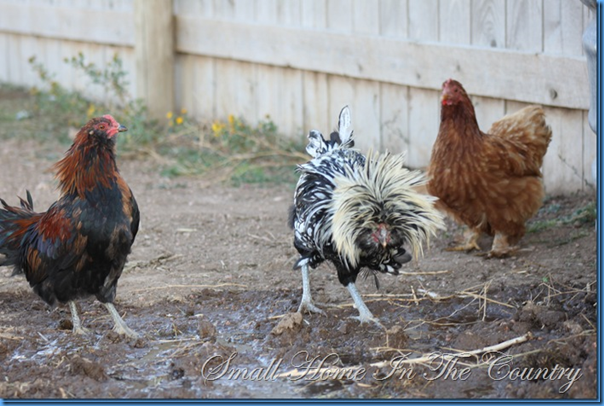 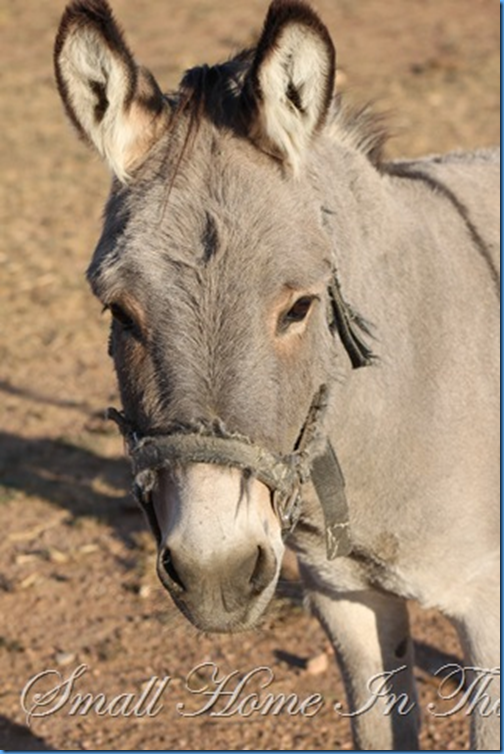 Sorry – I got allot of imagination.

Please visit Chari at Happy to Design for her 1 Year Anniversary !

p.s. wondering what happened to Satin ?? He was executed a few months later and he has been laid to rest in a frozen white coffin… as for the prisoners….they did escape and were never seen again.

I love this post. How funny! Those chickens are great.

I remember this one. Too funny. I just showed the chickens to my husband. You should have seen the look on his face. That is one good lookin' bird you got there.

I remember this Kammy! It is a really fun and cute post...Christine

This is just so much fun! Thanks for reposting it!

This is so funny, Kammy, I'm glad I got the chance to see it!!

Kammy I remember this cute post and enjoyed seeing it again!

Hilarious! All those escapees. You live in a dangerous neighborhood and I hope you lock your doors at night.. LMBO

Hi Kammy,
That was one of the most clever of posts! You do have a great imagination girl! I am sorry about poor Satan though. He looked pretty sweet, but he probably tastes pretty good too.
Hugs,
Cindy

I love these images!!
I am hosting a give a way tomorrow.
Please drop by.
It will be fun! :o)
Sincerely ~ Tricia

This is just as funny this time around. Simply love this one!!!

And yes, I was wondering about Satin. Looks like you may need a better prison guard;-)

Chari at Happy To Design said...

OMG...Girl, I remember this post! I just about split a gut laughing!!! You do have alot of imagination...but I love it! Sooo...you're prisoners ended up escaping after all? Bummer!!! I felt like I should have recited a eulogy for Satin...ahhh!!! Hehe! What a cute post to share for Sunday Favorites, my friend...very entertaining and sooo much fun!

I also wanted to thank you for coming by and leaving such a sweet note and for all of your well wishes for Sunday Favorites "One Year" birthday celebration!

Well Darlin', you have a super Sunday...best wishes with the gift card giveaway!

What a fun post! I really enjoyed seeing the animals.

I remember that post! I thought it was hysterical then and just as funny today! BUT at least this time I was prepared and did not bust out laughing while at my office! I received a lot of strange looks from my staff that day but could not very well explain to them why I had busted out with laughter for no apparent reason... 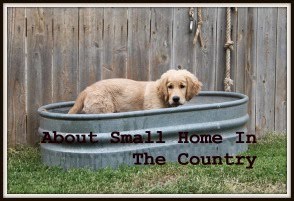 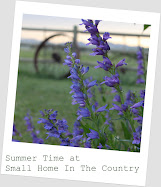 Although you may enjoy and wish to keep....

All photography (unless noted) and text within Small Home In
The Country. Blogspot, belong to me - Kammy. Please do not copy or use without permission. Thanks ! 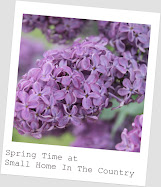 Kammy
I do really live in a "Small Home In The Country", close by the Rocky Mountains - I have one very beautiful view. Nobody ever stops by and the neighbors aren't close.I started Blogging in March 2009 of and it has given me the inspiration to decorate, create and bring out my other many hobbies to have friends, family and visitors to stop by for a bit..... 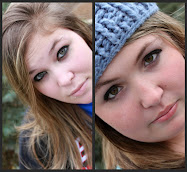 Small Home in the Country Button

My Friend Lori @ Family trees may contain nuts honored me with this award !

Your Blog is Fabulous !

Thanks Shauna at They Call Me Lucy

Thank you Nicole at BugaBoos Creattions ! 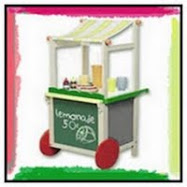 Thanks Chandy from Lace and Ivy Cottage ! 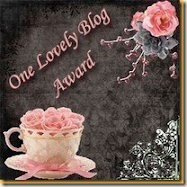 Thank You Susan from Between Naps on the Porch ! 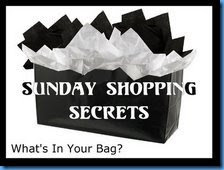 I love to shop and give my tips each week ! 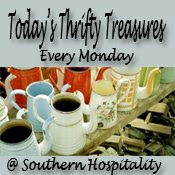 A quote from my husband "no food again ?" 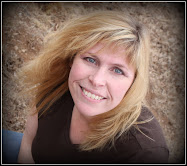